You are here: Home / Territorio / Our Land

Famous for its typical surroundings enclosed within slim silhouettes of the historical towers, San Gimignano shines like a precious diamond from the other times over the Tuscan hills regardless to an outstanding beauty of its rich and exceptionally beautiful countryside. Listed among the World Heritages of UNESCO, the historical city centre and its cultural patrimony, has become famous especially for its artistic and architectonical treasures.

The foundation of San Gimignano dates back to the ancient times of archaic Etruscan settlements and it mainly developed in the High Middle Ages thanks to its favorable geographical position along the ancient Via Francigena, traces of which are still well preserved. It has always had a character of a very frequented destination and one of the most important transit and stopping sites for travelers from all over the world, since the times when it became the route of pilgrims and merchants, who used to cross these territories on their path from Canterbury to Rome.

It’s a known historical route, via maestra, which still enchants visitors coming constantly on their way through this antique path. It is inserted gently in the mild scenery of Tuscan hills flowing into the little village of Pancole and San Gimignano. It turns back on north revealing the amazing panorama of Monteriggioni and Siena. It`s a real authentic journey, which lacks any ambition to carry its followers far away in the unknown places. It rather leads them through the deep self discovery process on their solitary pathway, while keeping them in eternal touch with nature.

All the territory is sparkling of thousands architectonical jewels: besides the historical Etruscan town Volterra (only 25km far from San Gimignano), beautiful square Piazza dei Miracoli in Pisa (distant only 90km)and a real renaissance artistic treasure Florence (45km), the surroundings of San Gimignano offer still more to discover. The old historical centers of the Middle Aged towns of Siena (35km), Colle Val d’Elsa (10km), fortified town of Monteriggioni (20km) or Montalcino (50km).
But what is fascinating the most is to discover a territory, which has managed to preserve its core values and passed them down through generations making them re-live through the use of the same quality standards and philosophy, which stand also behind our company.

The sanctuary of St. Mary the Mother of the Divine Providence

is located in Pancole, which overlooks our company. 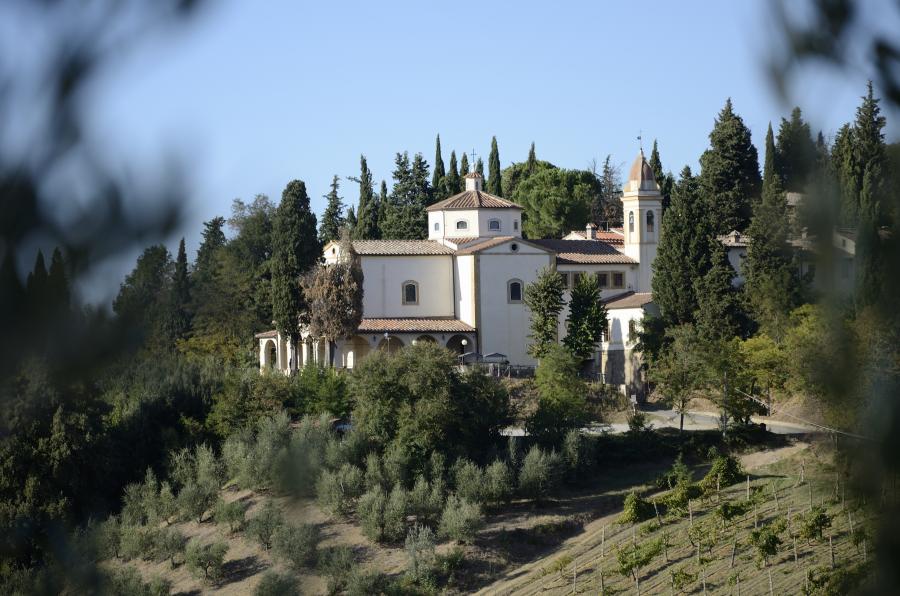 In the place where the church now stands, there was once a niche, on which Pier Francesco Fiorentino painted using fresco the portrait of the Virgin Mary nursing the baby Jesus. Later in time the niche remained neglected, till the point the shrine ended up covered it in brambles until it eventually disappeared from view.

In the second half of XVII century the valley Valdelsa was serioously hit by a period of extreme poverty and famine due to very drought years. Legend has it that in the beginning of April of 1668 Bartolomea Ghini, a shepherdess, born mute, was feeling particularly saddened by her impoverished state, and, as she led her flock to the pasture, she began to cry. A beautiful woman appeared in front of her, asking why she was so sad. When Bartolomea answered her, the woman reassured her, telling her to go home, where she would find a pantry full of bread, a full cruet and overflowing barrels of wine.

Bartolomea suddenly realized, that she had actually spoken and ran home, yelling for her parents at the top of her lungs: they were amazed both at hearing their daughter speak and at seeing the pantry filled. All of the villagers went to the pasture where the girl claimed to have seen this mysterious woman, but they found nothing but a heap of brambles.

At this point, they eradicated all of the plants and discovered that they had been hiding the niche with the image—an image that, according to Bartolomea, depicted the same woman she had met. While the brambles were being removed, the icon got scratched by a pruning hook, and you can still see the mark. It was at this point, when they decided to venerate Madonna attribuiting her a title of the Mother of Divine Providence.

This news drew a multitude of pilgrims, who brought special offerings and materials to build a church to house and protect the image. The building was erected and consecrated within just two years (the major part of the construction was concluded in 1670).

In 1923 the Church was upgraded in dignity becoming a Diocesan Sanctuary.

On July 14, 1944, retreating Germans undermined it a bit and the building was almost completely destroyed: only the altar wall where this sacred image is found was saved. The reconstruction was first assigned to the architect Dino Loni, who opted for a neo-classical centre-oriented reconstruction of the building, reduced in its dimensions, with a high cupola, but still very captivating and more majestic than ever.

Eventually, the small temple was rebuilt following the previous model under the guidance of the professor of Architecture Severino Crott: the sanctuary was re-consecrated on October 19, 1949. On October 12, 1997 the legal regency/patrimony/administration of the building was transferred from secular clergy to the Institution of Servants of the Immaculate Heart of Holy Maria.

In 2000 the Sanctuary was chosen as a privileged location to host a jubilee plenary of the Concession of Indulgence.

The Church in Pieve di Cellole 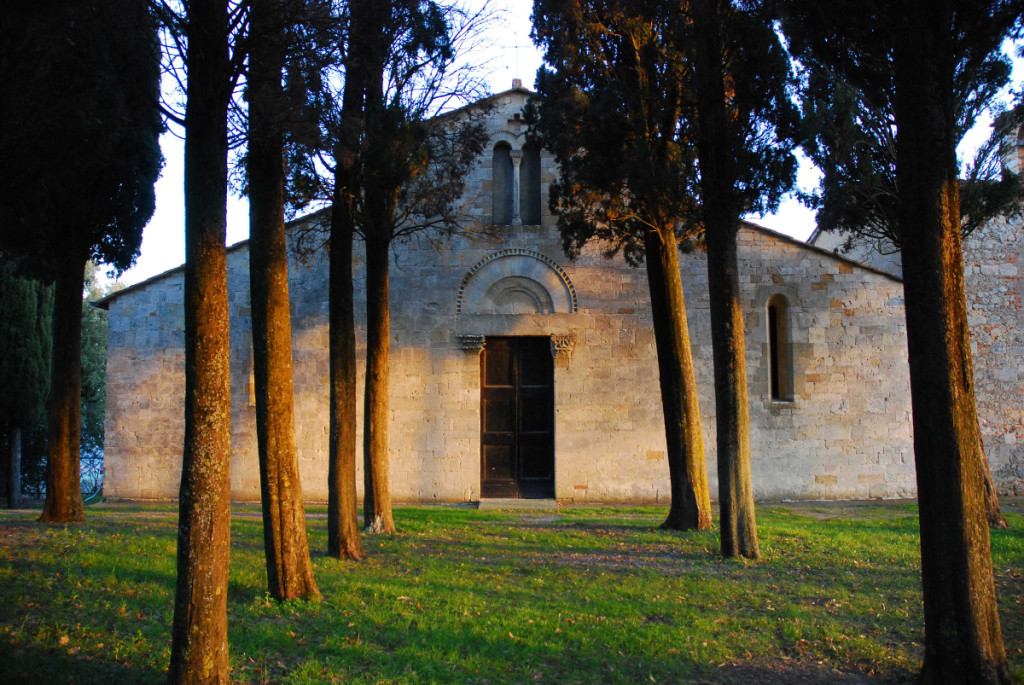 Looking on the top of the beautiful hillside on the north west from San Gimignano, we can spot, hidden behind a series of cypress planted in XIX century, an astonishing romanescque church Pieve di Cellole.

The first mention of this Church dates back 949 and 1011 having been documented in two different maps as the Church of San Giovanni Battista. In a foundation document of Badia A Elmi from 1034 we can read that at those times it had been already consecrated to St. Mary of the Assumption.

Its present front gate dates back to 1238, but it appears in the version of its reconstructions from the nineteenth century.

It shows up in quite flattened proportions, which is a typical sign of the simple rural ecclesiastic architecture with a nave and two side aisles of the Siena countryside. The front door and the arrow loop in cross form are the originals.

The portal reveals a ferrule decorated by a wedged prism. Moreover, it contains a monolithic lunette with a recess settled on an epistyle raised by decorated shelves. The semi-capital on the left side reveals a typical decoration of three upward looking foliages, very similar to those we can find in Duomo di Volterra; the semi-capital on the left reveals a particular plot of zoomorphic figures stylized and disposed in symmetrical way.

There is a double lanced window in the centre of the facade created in early 20’s and on the right side from the masonry sticks out a very consumed human bust, whereas at the left at the very same level of the architrave, we can find the following inscription: REMOTA FUIT H PLEBS A M CXC IN ITA FACTA TEMPORE ILD PLE, which is considerate to be a proof of the fact that in 1190 the title of the previous church situated in its proximity was translated to fulfill the wish of the current Bishop – ildebrando. The side walls of the building are completely blind.

The present construction holds a structure of the church with a nave and two side aisles divided by columns and pillars, which support a series of astonishing pointed arches.

Blessed by a rare occasion to observe it from its insides, we can clearly distinguish two main construction phases: the first one involved directly the presbytery and the right side wall, whereas the second had an impact on facade, crossing points of the side aisles, the bell tower and the left side wall.